Archive for the ‘Cocoa’ tag

I have just finished all major work on MacGDBp. All the v1.0 features have been added and there are no existing issues (that I know about). I’m going to put it through a few days of dog-food testing, but expect a release sometime this weekend or very early next week.

Along with testing, all the release materials still need to be prepped. Those include the website, help/documentation information, and marketing/PR. So once those are finished, all systems are go.

Regarding Thursday’s announcement of an iPhone SDK:

I am most certainly interested in writing iPhone apps. The beautiful device tempts me. Thankfully, however, I do not have any ideas for phone apps at the moment (which means no new ideas in the pipeline). I’ll update if anything strikes me. And until that point, I won’t be shelling out the $99 for a certificate.

Last weekend my friends and I discovered the Scrabulous application on Facebook. Personally, I am very bad at Scrabble, but my friends insisted that I play. The game was starting to hurt my head and I was getting frustrated, so I wrote a program to do the thinking for me. Enter Scrabbalize.

Scrabbalize is quite simple. You type in all the letters (“tiles”) for your game into the text box as one long string. Press go, and then the program will run through a dictionary, finding all the words that have some or all of your letters. It then sorts the words by length so you can see your best options.

It is written in Cocoa and it requires Mac OS X 10.5 beacuse I wanted to try garbage collection and fast enumeartion. Both of these things make my life significantly easier, so expect all future Mac OS X applications to require 10.5. Of course, the source code is available if you want to take a gander. 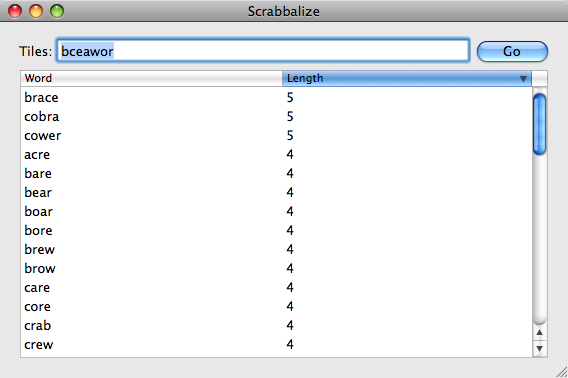